Elisabeth Bem was an outstanding master of silhouette: over a fourteen-year period (1875 - 1889), she created 14 silhouette albums. Both domestic and foreign publishers reproduced her art works; Bem won a silver medal for her silhouettes at an international competition in Brussels.

She had a great success as a watercolorist as well. In 1870 the artist took part in an art exhibition of water-colours in Paris. She was rewarded with a golden medal for the works: "Cats", "Game-bag", and "Country children".

Bem also worked on books, magazines and other illustrations, she was a successful designer of cut glass.

She also produced etchings and worked in ceramics and glass.
Occasionally, she is referred to as Elisabeth Bohm, having married the violinist Ludwig Bohm.

Автор более 360 цветных и чёрно-белых почтовых открыток.
Elisabeth Bem was best known for her postcards. Much of her work is based on Russian life and folklore. She produced over 360 postcard designs, mostly children on holiday greetings. Scenes of childhood had inspired the artist who created some of the most memorable children's images of her time.
произведение:
открытка:
postal card: »

He takes to she as pigeon, but she takes to he as the grey hen

I is glad to marry

It would be desirable to tell much

Though it is not coherent, but harmonious. Write and know, it will disassemble if it is necessary! 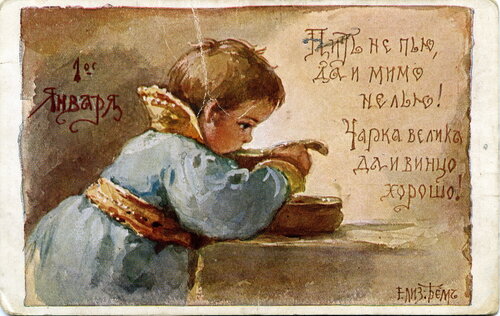 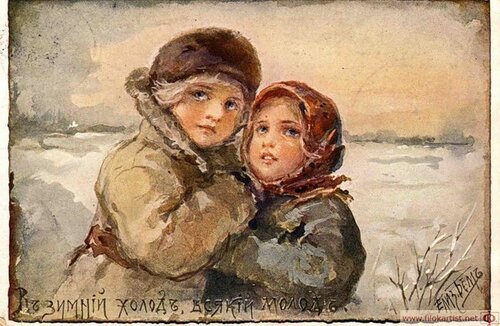 Воевать тебе на печи с тараканом!
You are ready to fight on the furnace with a cockroach!

Дума, кума, не лиши нас ума!
The dear Assembly, do not deprive us of mind!