история:
Эллен Клапсаддл (~1864 - 1934), американская художница »
Художник открыток. »
She worked on portrait and landscape commissions for wealthy locals out of a studio in Richfield Springs, NY.
She illustrated several postcards that caught the attention of International Art Publishing.

Clapsaddle honed her skills while working with International Art Publishing and her artwork was featured on calendars, trade cards, Valentine cards, and other types of ephemera from the late 1800s through the early 1900s. At the age of 40, she became a full-time employee of the Wolf Company. She worked for Wolf for eight years as the company's sole designer. She is best known for her colorful artistry found on vintage greeting postcards, many of which featured children and youth with sweet expressions. During her career, Clapsaddle completed close to 2,000 postcard illustrations.

After moving to Germany to be closer to the Wolf Company's engravers, Clapsaddle was stranded as World War I broke out around her. The factory where her original illustrations were stored was burned and conditions quickly deteriorated. She found herself confused, alone, and no longer able to earn a living as an artist. Her mental capacity was compromised. She basically wandered the streets until one of the Wolf brothers traveled abroad to bring her home. She was 55 at the time. The Wolfs cared for Clapsaddle after returning home to New York until they died several years later.

Even her unsigned cards are recognizable and desirable to the avid collector. Reproductions of her illustrations frequently appear on contemporary vintage-style decorative accessories as well.

название:
Вершина утра к Вам
The top of the morning to you

of the
morning to you.
предмет с изображением:
открытка
postal card

Angel forges chains for hearts in a blacksmith shop.

тема:
Рождество
Christmas
надпись:
Christmas Greetings
A simple token.....
...... sent to say,
I think of you ....
this Christmas Day. 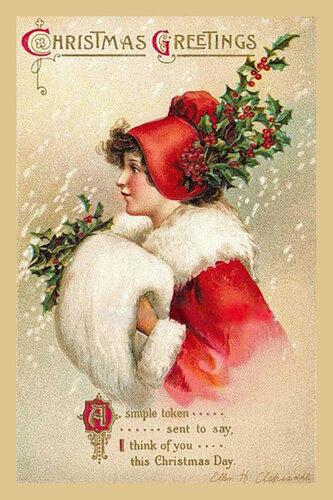 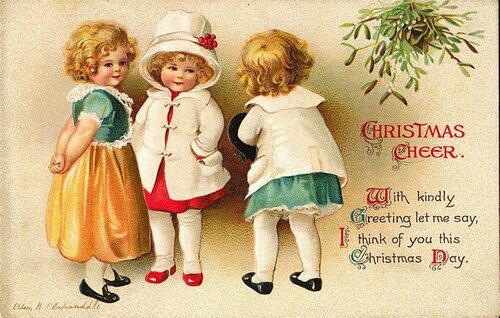 Good friends ever near.